I know, I know. I really should have taken him down already. Christmas was what… a month ago now? But there’s something so sweet about a little Christmas tree, decorated with simple ball ornaments and tinsel. I purchased him a few weeks before the holidays, due in great part to the large amount of presents that had begun arriving at my apartment. My mom was clearly doing her part to make our family’s first Christmas away from home a memorable experience, so I felt a obligated to pull my own weight.

And thus, I bought a tree. And decorated it with thrift shop artifacts. See?

And there he remains, tucked in the living room corner. Useful only as a space-filler… and as a perfect segue into a blog about my first holiday season in Los Angeles.

As I’ve already alluded to, my family came out for a visit last month. And by “visit”, I mean nearly three weeks of “family fun time”. My sister camped out at my apartment while my folks stayed at a nearby Courtyard for the first week. I had to work nearly every day, so I provided them with a long list of activities they could pursue and then met up with them at night for dinner. Christmas Eve rolled around quickly (a day where I worked shifts at the golf course AND at the restaurant). I was able to cut out of work just in time to go to the Christmas Eve service with my family. I must say, Lake Ave Church did an amazing job of slowing down my frantic pace and allowed me to truly settle down into the spirit of Christmas.

After a good night’s sleep, my parents came back over to my apartment in the morning to open gifts. While the gift pile has certainly been shrinking over the years, I must say it is still delightful to open presents. I know a lot of families cut that out at a certain age, but I really appreciate how my mother has kept that tradition alive in our house. Susanna and Mom made a delicious brunch of our traditional Christmas foods: egg casserole, fruit salad, and coffee cake. I kept busy making coffee for my sister and I from a french press. It really felt like a “homey” Christmas occasion.

But, soon enough, “family time” was over. There were several Wheaton grads in the area who were not able to make it home for the holidays, and we wanted to make sure they were able to have a memorable Christmas experience, too. Ten took the train over to Pasadena in the afternoon and Jimi drove over with his brother and cousin (their family is in Argentina). We hung out for a while and played cards before dishing out a massive spaghetti feast. Once we were filled to bursting, we loaded up our cars and headed for the movie theater. We knew we probably weren’t the only ones who had it in mind to see “Les Miserables” on Christmas day, but we were still slightly shocked by the line wrapped around the outside of the movie theater. Thankfully, I’d thought to buy tickets online, so we had an enjoyable movie-watching experience.

And that was our Christmas.

But my family was still here for two more weeks. What to do?

This is a magical place. Part museum, part luscious gardens, it is simply a spectacular place to walk around and take in the extraordinary grounds. Desert plants, jungle vines, rose gardens… all are kept in pristine condition (and they can all survive in the temperate climate of LA). Each of the three or four buildings (all parts of the Huntington family mansion) contains beautiful art collections. My dad was particularly impressed by the Civil War exhibit.

I, however, was most excited by the grassy avenue right in the middle of the property. Two rows of statues were set just inside of the grass hedges that framed the area. I kept thinking to myself “I know this place from somewhere!” Here, take a look:

No? Not a clue? My sister and I both giggled when we realized that this was the same grassy avenue that JLo and Matthew McConaughy walked down during the movie “The Wedding Planner” (if you’ve seen the movie, I’m sure you’ll remember the part that Matthew accidentally breaks off the statue).

So many movie moments in LA….

For precisely one day a year, the world actually changes its course to revolve around Pasadena, CA. The Rosebowl Parade is a huge deal. Stands were built along Colorado Blvd months in advance. Trailers and campers began to arrive from all corners of the country over a week before the festivities began. Thousands of people camp out overnight, trying to snag a great view of the parade. My sister and I considered joining these individuals… but decided a warm bed sounded much more enjoyable. Besides, I live four blocks away from one of the best intersections on the parade route: Colorado and Lake Ave. About an hour before the parade, my family bundled up and headed out. We got right to the corner as the parade came into view! 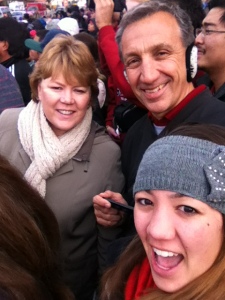 The theme was Dr. Seuss’ famous “Oh, the Places You’ll Go!” The floats ranged from exotic to silly, but all of them displayed a marvelous assortment of roses. It was quite a fun adventure (we were surrounded by some odd folks), but, like many things nowadays, we decided that it’s probably more enjoyable to watch the parade on tv.

Going to a Rosebowl has been on my dad’s bucket list forever. As soon as the tickets went on sale, my mom told me to try and snag a set. Unfortunately, there is quite a hefty price tag since college football is everything here in LA (possibly the largest city in the US without an NFL team). I kept checking in on stubhub.com, waiting patiently for ticket prices to come down to our range. We were fine with nosebleeds- it just mattered that we were there. When the time finally came to buy, I was just about to click on a set high up in the rafters, when suddenly another grouping appeared: 4 tickets in Row E.

E. As in 4 letters back from A. As in practically on the field.

Needless to say, I bought those tickets QUICK!

The Rosebowl stadium is almost exactly 3 miles from my house. In order to avoid the chaos of parking at the stadium (and the exorbitant parking fees), we just planned on walking to the game. Before we attempted this overly ambitious feat, Jimi volunteered to drive us as close as possible to the stadium before the logjam effect set in. We hopped out of the car, walked down the incline into the valley and right into the front gates.

Not going to lie, we felt pretty cool walking down to our fifth row seats. The stadium is very flat (as in, the sides aren’t very steep), so it literally felt like we were at ground level with the players. It was a sea of red as Stanford faced off versus Wisconsin. Both Susanna and I were born in Waukesha, WI, and my parents felt the need to regale us with stories of Badger games “back in the day”. It was fun to have a team to cheer for, though! Stanford took a quick lead, but Wisconsin was able to put on the breaks and slowly get themselves back into contention. It came down to the last quarter, but even when it was clear that Wisconsin wasn’t going to pull it off, not a single fan left the stadium. The stayed in their seats until the fifth quarter began… when the band took the field. Wisconsin has this incredibly marching band (that clearly knocked the socks off the Stanford ensemble). It was a fun “show” to end the game with!

I suppose I could go on to tell you about our brief trip up to Ventura, or my mom and sister’s outing in Palm Springs. I skipped up to Santa Cruz for a friend’s wedding and while I was gone the family went out to Newport for a couple days (where my dad had the opportunity to preach at a church that was an offshoot of Bel Air Pres). Like I said, it was a crazy few weeks out here.

I’ll finish with my mom and sister’s last night in town (my dad flew back home right after the Rosebowl). I have become a slight Lakers fan during the last few months. I’d been talking up the games so much that when the opportunity came up to go to a game, my sister jumped at the idea (apparently my dad’s sports enthusiasm is finally rubbing off on his girls!). My mom was happy to go with the flow. We ate a fun dinner out at the Staples Center complex and then headed inside the arena. The stadium only has two decks: the lower bowl and the upper rim. Between these two sets of seats, there are three layers of box seats (only in LA do you need so much classy seating…). We were up high, but had a good view of the game. The Lakers were playing the Denver Nuggets, whom they’d lost to just before Christmas. As the players took the court I whispered to Susanna (rather, I yelled in her ear over the roar of the crowd) the names and brief bios of the Lakers team. Dwight Howard, Steve Nash, Pau Gasol, Jordyn Hill, and (of course) Kobe Bryant. Whew. What a line up! By halftime, Susanna wanted a Lakers hat. I felt like I’d accomplished something.

Once again, the team we were rooting for lost (the curse of the Bouzeos family?). But it was great way to end our time together in LA. Mom flew home to Indianapolis, Susanna flew back to Atlanta, and we all resumed our somewhat-normal lives again.

My little Christmas tree keeps all those precious memories alive and well, though. So I think I’ll keep him around a few more days…