After two weeks of eating our way through Tucuman, Jimi and I decided it was time to embark on a roadtrip. Lonely Planet Argentina

called Tafi del Valle a “lovely hill town.” Jimi remembered it as a sleepy little valley where his family went on vacations during the hot summer months. Tafi was only a two-hour bus ride away and offered a nice change of scenery— good enough of an excuse for me! 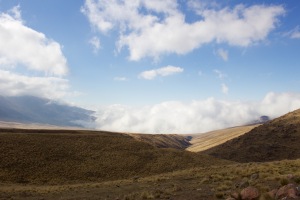 We stayed in a hostel that felt more like a home. It was a family-run operation called Nomade, with handmade decor and bright murals covering the walls. There were roughly two dozen occupants— and one individual bathroom. On the plus side, the husband and wife duo prepared amazing home-cooked meals for us in the morning and evening. It was an incredibly communal atmosphere, complete with late night guitar sessions and afternoon treks. During our first dinner, the hostel manager, Tony, announced that he would be leading a hike up to the Santa Cruz ruins and waterfall the next day.

Seven of us indicated interest and we gathered at 9am the next morning. I was a little vague on what we would be doing, knowing only as much as Jimi translated at dinner the night before. The group set off across town, stopping by the local market for lunch food before heading to the bus stop. We rode a packed bus down a one-lane road. It made a big sweeping loop through the outskirts of town before dropping us… somewhere. It was a very nondescript country road. We walked past farmhouses towards the mountains in the distance.

And so began the next seven hours of our life— at least we weren’t hiking a volcano.

It was a long hike into the clouds. The pace was not stressful, but the air started to get noticeably thinner. We went from tank tops to long sleeves to full coats (I was so glad I had thought to bring mine along). We stopped for a snack in some of the old ruins (which were cool— but nothing special) and Tony mentioned that we would be ascending to around 3,000 meters. When Jimi translated this for me he looked a little incredulous.

“Almost 10,000ft? That is some crazy altitude. They didn’t even mention it last night.”

But, there was no going back! It was onward and upward. We passed horses grazing on the hillside and shepherds herding large flocks of sheep. Stray dogs barked at us; one decided to join us for over half the ascent. 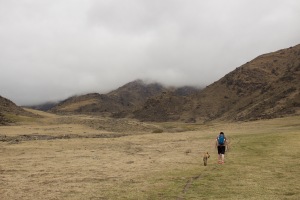 Once again, I was struck by the “communal” aspect of Argentine society. Everyone had purchased food, but they immediately pooled their resources. We chipped in our bread and ham and two of the guys began to make sandwiches. Someone had brought fresh tomatoes, another condiments, another cheese and salami. We all ate to our heart’s content (and Jimi made sure our canine companion got a bite, too). Two people also brought mate, which is a small pot in which they make a traditional type of tea. A metal straw filters out the tea leaves and the whole contraption was filled repeatedly with hot water as it was passed around. I tried a sip and they all cheered. I am not a big tea drinker, so I didn’t find the taste particularly appealing. However, the activity itself reminded me of smoking hookah in the United States and I enjoyed feeling part of this Argentine experience.

The way down was slightly more precarious, but the views were stunning. We had literally climbed above the clouds. Our final stop was the promised waterfall. It was a beautiful way to finish the day and a nice place to catch our breath for a few minutes. We caught the bus again and feasted back at the hostel on homemade pasta and meat sauce. Food had never tasted so good.

While the ruins of Santa Cruz weren’t particularly inspiring, we had heard that the Quilmes settlement was really worth seeing. We hired a van to drive us, along with five other hostelers, out to the site the next day. It was a relief to ride the whole way there! Quilmes did not disappoint. Both the museum and the ruins were absolutely breathtaking. Fun fact about the Quilmes Indians: they survived Spanish conquest for almost 150 years. That is guns versus obsidian axes! Pretty impressive.

On the way back to town, we stopped at a roadside comedor (dining hall). It was something slightly less than a restaurant, and we didn’t expect much from the food. Once again, we were pleasantly surprised by the homemade pasta dishes and the tasty empanadas. I have yet to be disappointed by food in Argentina.

It was a pleasant way to spend three days. I’m sure we could have more fully embraced the sleepiness of Tafi by sleeping in and wandering the main crossroads downtown, but we have a knack for finding adventures.